Swansea, the Welsh Premier Women’s League Champions, have qualified for the UEFA Women’s Champions League and will play CSKA Moscow (Russia) in round 1 next month.

Torquay, who play in fifth tier of the English game – in the South West Regional Women’s League Premier Division – made a strong start on a blistering hot day at their Stoke Gabriel ground.

The Devon team took an early lead  when Danni scored from a crossed ball across the penalty box, which she slotted past the keeper.

Swansea equalised, then took the lead, and the game ended 3-1 – a very respectable performance against a national champion team.

“We stepped up and played so well,” said Danni. “I’m super happy – I’m so pleased to have scored against a Champions League side, and it’s a great building block for us. Pre-season is all about the minutes and the fitness, and today we showed what we are capable of. It’s going to be an exciting season!”

“I’m so chuffed to have scored against a Champions League side – one for the memories!” 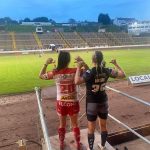 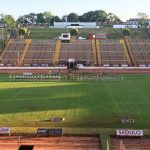