A sports history book by our senior consultant Andrew Weltch is still proving popular 19 years after it was published.

Former Cardiff Devils head coach Troy Walkington contacted us from Saskatoon, Saskatchewan to say how much he enjoyed Andy’s photo-history of the team, released in 2001.

“Unbelievable memories and was great to see so many familiar faces and the outstanding accomplishments of such a fantastic club,” he said. “It was a great read!”

Troy coached the Devils from 1999-2001 in the final two seasons of the UK hockey’s Superleague, and took them to second place in the 2001 competition, including a 12-game unbeaten streak.

The Canadian came to Britain in 1992 and coached Romford, Basingstoke and Peterborough before joining Cardiff. He was also head coach of GB’s under-20 team and assistant coach of the senior team.

Since returning to Canada, he coached junior hockey in Flin Flon for two years before heading home to Saskatoon to start a career in real estate.

He combined that with coaching at the University of Saskatchewan from 04-19. “I coached some outstanding players during my time there and have sent many to the UK over the years,” he said.

The book Images of Sport: Cardiff Devils told the story of the club from its founding in 1986 to Troy’s departure in 2001. It was published by Tempus, now part of The History Press.

Andy, who reported on the Devils for many years, said: “It was a lot of fun compiling the book, and really great to hear from Troy after all these years. I have a lot of great memories from those times.” 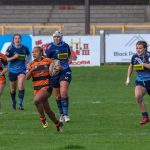 Kelsey returns from injury to train with EnglandSport