Versatile British actor Nicola Sanderson has had regular roles in some of the UK’s biggest TV series, including Coronation Street, Law and Order: UK, and The Bill. She’s also appeared in some of the funniest shows on radio, and a huge range of stage productions.

Our companion arts and entertainment blog, Piece of Pink Pie, has published an interview with her, covering her route into theatre, her TV and radio work, her achievements as a writer, and her latest plans.

Nicola talks to our senior consultant Andrew Weltch about the differences between acting on stage and for TV and radio, and the contrasting experiences (and rewards) of performing comedy and drama. 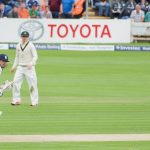 Questioning ‘The Hundred’ – the fears over a new form of cricketBlog post, Sport