We’re excited to announce we will again be sponsoring striker Danni Wyatt at Torquay United Women FC for the 2022/23 season.

We first sponsored Danni in the 2017/18 campaign, when she helped Torquay to third place in the South West Women’s Premier League and to the final of the Devon Cup. She also won the goal of the season award.

Danni hopes to be in the team to face Cardiff City Ladies in the first pre-season game in South Wales on Sunday (10 July) and is due to make her 100th career appearance for the club this season.

“It’s so great to be partnering up with Weltch Media once again for another season with Torquay United Women,” said Danni. “Weltch Media’s support has allowed me to enjoy the game and club I love with no restrictions and helped me form some great friendships.

“We are so excited to be a huge part of the Torquay United community as a whole this season and with our new badge, we hope we can demonstrate how hard we’ve worked to get here. I’m looking forward to making my 100th appearance for the club this season with Weltch Media by my side it’s going to be an achievement I will never forget. Once a yellow, always a yellow!” 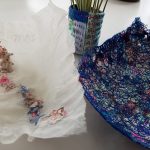